Learn about the life and legacy of one of the most important and impressive political figures in Alaska when you visit the Wickersham House State Historic Site. James Wickersham, often called Alaska’s Pioneer Judge, is a former district judge and delegate to Congress who made history when he made the first recorded attempt of climbing Mount Denali. Today, visitors can tour the House of Wickersham and learn about the former judge as well as the history of the Gold Rush Era. Are you interested in touring more great historic sites in Alaska? Download our free Vacation Guide and get the full list of our recommendations for area attractions!

The History of James Wickersham

The Wickersham House State Historic Site (not to be confused by Wickersham House, another former residence of James Wickersham located in Fairbanks) was the final home of James Wickersham. The property was originally built in 1899 and was bought by Wickersham in 1928. He lived in the house until his death in 1939. In 1958, his niece opened the home as a museum, detailing the life of her uncle and the Gold Rush Era in Alaska. Since then, the state of Alaska purchased the home, and it became one of the major fixtures in the Chicken Ridge Historic District in Juneau.

During your visit, you’ll learn about Wickersham’s life and legacy. He was appointed as a district judge for Alaska in 1900 by President McKinley. After his resignation as judge, Wickersham was elected as Alaska’s delegate to Congress, where he served until 1917. There, he became known as a passionate advocate for Alaskan interests. The former judge was essential in creating Denali National Park, building a railroad through the state, establishing the University of Alaska, and Mount McKinley National Park. He even introduced the idea of Alaska becoming a state a full 43 years before it happened.

Today, the Wickersham House State Historic Site is open every day from spring until fall, from 10:00 a.m. until 5:00 p.m. There is no entry fee, making this the perfect attraction to visit if you’re on a budget! Guests can tour the home led by a knowledgeable volunteer guide and learn about the fascinating history and get a glimpse of how Alaskans used to live in the Gold Rush Era! Best of all, this is just a seven-minute walk from Silverbow Inn Hotel & Suites.

After you’ve toured the historic House of Wickersham, return to the modern and comfortable Silverbow Inn Hotel & Suites for a relaxing evening! We are centrally located in downtown Juneau, just a short walk from the best attractions in the area, including the Wickersham House State Historic Site. In fact, there are over one-dozen restaurants, bars, and cafes within three blocks of our bed and breakfast.

Consider adding one of our specials and packages to your reservation! The Zipline in the Tongass National Forestpackage includes a zip line adventure in the Eaglecrest Ski Area. You’ll get to soar above the trees in this fun day out! It’s just $149 per person and includes transportation, rain gear, and snacks.

Check our availability and book today! We look forward to having you.

Get the latest news & insider deals from Juneau Alaska and The Silverbow Inn Hotel & Suites. 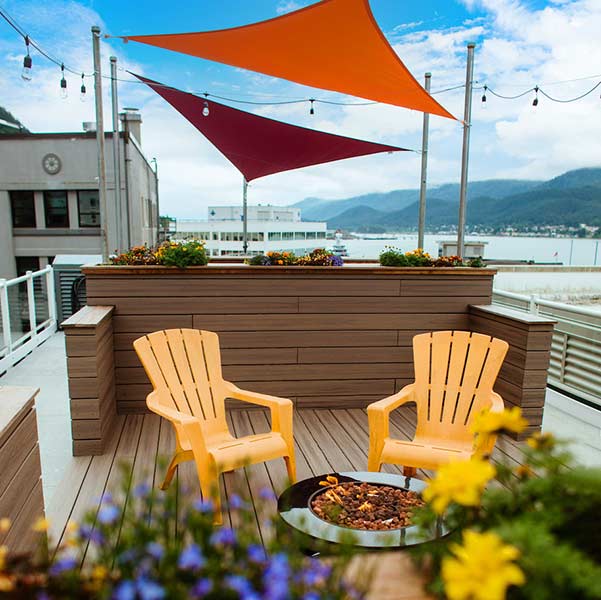 Right in the middle of downtown Juneau.  Walk to the capital, all downtown offices, and the harbor.  Dine at In Bocca al Lupo a James Beard awarded restaurant on site.